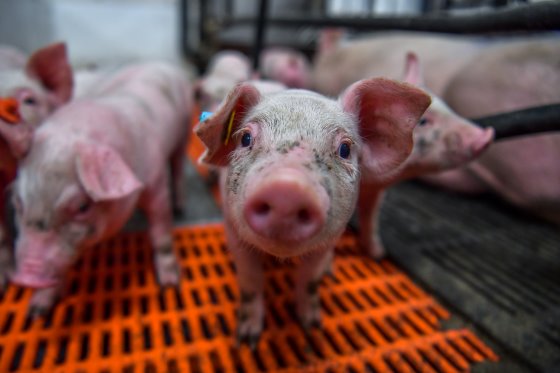 US researchers have produced a litter of pigs of which they claim they are genetically resistant to Transmissible Gastroenteritis virus (TGEv), causing gut disease with almost 100% mortality in piglets.
The team, consisting of researchers from the University of Missouri (MU), Kansas State University and breeding company Genus, has succeeded in breeding pigs that are resistant to the virus by means of gene editing. They shared their findings in a recent publication in the peer-reviewed publication Transgenic Research.

Enzyme as receptor for TGE virus

In a news article shared by the University of Missouri, Randall Prather, professor of animal sciences, said, “Previous research had identified an enzyme called ANPEP as a potential receptor for the virus, meaning it could be an important factor in allowing the virus to take hold in pigs.

“We were able to breed a litter of pigs that did not produce this enzyme, and as a result, they did not get sick when we exposed them to the virus.”

The news article explained how Prof Prather and his colleagues edited the gene responsible for making the ANPEP enzyme, resulting in a litter of 7 pigs with a ‘null’ gene that did not produce the enzyme. When exposed to the TGEv virus, these pigs did not become infected, showing that the presence of the ANPEP enzyme is necessary for an infection and gene editing can create pigs that are resistant.

Genetic resistance will help to ease the burden

Kristin Whitworth, co-author on the study and an MU research scientist, added, “It’s a tremendous financial burden for farmers to put time, money and labour into animals that will get sick. Breeding pigs with genetic resistance will help to ease that burden. In terms of animal welfare, if we can prevent these pigs from getting sick, we have a responsibility to do so.”
In comparison to the scores of gene mutations that occur naturally during the reproductive process, researchers only altered the expression of a single gene. Those pigs lacking the enzyme were healthy and experienced no changes in development.

Porcine coronaviruses are a global threat

Raymond ‘Bob’ Rowland, professor of diagnostic medicine and pathobiology at Kansas State University, was also one of the co-authors of the study. In the news article, he commented: “The collaboration with Randy and his team has established some of the most rewarding milestones of my career. Porcine coronaviruses are a global threat to the pig industry. One of the greatest concerns for US producers are outbreaks of new coronaviral diseases.
“Once again, this work demonstrates the importance of this technology in solving complex disease problems. Genetic modification to protect pigs from endemic and emerging diseases is the future of the pork industry.”

The study follows a similar development achieved in 2015, when MU’s genetic engineering team made pigs resistant to Porcine Reproductive and Respiratory Syndrome (PRRS) virus by using gene editing.
The University of Missouri partnered with Genus to commercialise that method of producing virus-resistant pigs. Genus is currently seeking FDA approval for the use of gene editing technology for use in eradicating the PRRS virus.
The study also sought to determine whether editing out ANPEP would produce resistance to Porcine Epidemic Diarrhoea virus (PEDv), which killed nearly 7 million pigs in a 2013 outbreak. While pigs lacking the enzyme still contracted the virus, researchers are optimistic that the study bodes well for future research.
The study was published in Transgenic Research. Researchers involved in the study were Randall Prather, Kristin Whitworth, Melissa Samuel and Kevin Wells, University of Missouri, Columbia, MO, United States; Raymond Rowland, Vlad Petrovan, Maureen Sheahan, Ana Cino-Ozuna, Ying Fang and Richard Hesse, Kansas State University, Manhattan, KS, USA; and Alan Mileham of Genus.